Mary Lee Partington was the voice, songwriter and tunesmith for the internationally acclaimed New England-based group Pendragon. In addition, Mary Lee's award-winning music was featured in the National Park Service series Along the Blackstone.

Partington & Sweeney  tell stories of immigrants, farmers and factory workers during 19th & 20th century America, where self-educated mill girls earn their own keep, an orphan endures to tell her tale, where old ballads have taken root and where migrants go farther west.

“I just listened to this and I loved it! This old New Englander's ears perked up hearing these gorgeous songs” - Wanda Adams Fisher - Hudson River Sampler WAMC 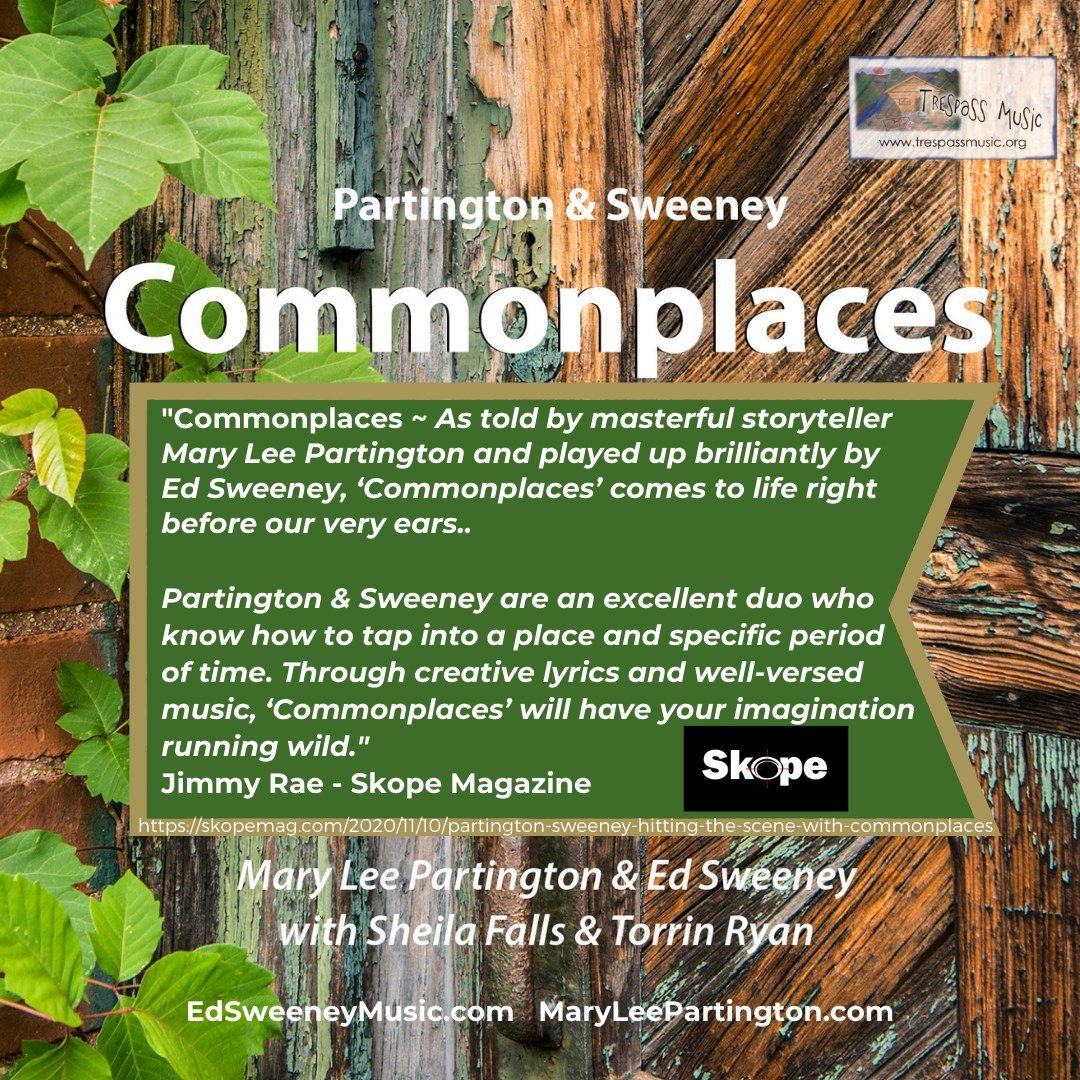 “I just listened to this 3 times back2back this afternoon through 3 different sound sources. This is the Christmas stocking stuffer you are going to want to get...early...one for you now and one for someone later. Such very rich sounds both instrumentally and vocally, it will instantly place you in a vibration of euphoria and keep you suspended there, your mind tracing all the words of the lyrical stories, and pondering how you feel every sense of your mind, body, and soul elevating. THIS is a must have. Dang this is stellar indeed. Finally some freakin real music coming out of the ashes of Summer to move the mings & spirit forward. We are so lucky. Thank you kind Sir and very finely kept company” - Josephine Elle

“Calling this new release by Partington & Sweeney a throwback album would be an understatement to say the least. Reason being is because this eclectic duo has decided to travel all the way back to the 19th and 20th centuries in America. Their latest album titled ‘Commonplaces’ focuses on the immigrants, farmers and factory workers during these eras. As told by masterful storyteller Mary Lee Partington and played up brilliantly by Ed Sweeney, ‘Commonplaces’ comes to life right before our very ears. This new record features: Mary Lee Partington on vocals, Ed Sweeney on guitar and banjo, Sheila Falls on fiddle and Torrin Ryan on uilleann pipes, flute & whistle. Together, they invite you to head back in time to ‘Commonplaces’ through the sounds of traditional & original folk music. The CD starts up with a terrific number called “The Manchester Mule Spinner” that is wonderfully orchestrated. This song comes to life and glides along elegantly by way of pristine storytelling. Next, we hear “Times A Getting Hard Boys” that provides a slowed-down tempo and solemn demeanor that is both sweet ‘n’ subtle. Track three, “Young But Daily A Growing”, will have you dancing a jig to this musical crop that is ripened to perfection. Sailing along, we make a stop at “Deer Island” where a nautical vibe dominates all of the layers. This song is right on course, so full speed ahead to “Deer Island”! Track five, “New England’s Daughter”, is strumming along at a steady pace while the following number, “Like Bread Upon The Water”, supplies a welcoming and comforting aura to the listeners. The 7-song set ends on a stellar note with “So Here’s To You” as a fantastic melody instantly pulls you in. With superb instrumentation in place, “So Here’s To You” Partington & Sweeney AND to a job well done! Partington & Sweeney are an excellent duo who know how to tap into a place and specific period of time. Through creative lyrics and well-versed music, ‘Commonplaces’ will have your imagination running wild. I recommend taking a listen to the new album by Partington & Sweeney and can’t wait to hear the next chapter and journey! To Be Continued…” - Jimmy Rae

“Though a bit stripped down to basics instrumentally the appeal of Partington & Sweeney’s 7-cut Commonplaces (drops Nov 1 – Trespass Music) will attract ears accustomed to the beauty of music produced by groups such as Curved Air, Pentangle & Steeleye Span. The material is primarily culled from traditional sources with some original songs that draw generously from that inspired genre. The tunes are light, inspired, filled with little stories about immigrants, farmers, factory workers who labored through the 19th & 20th Century America. A young mill worker who leaves the city of Manchester UK for new uncertain opportunities in New York. “Times Are Getting Hard, Boys,” is a beautiful lullaby-like Dust Bowl (1930-40) era ballad excellently rendered by Mary Lee Partington (former singer with acclaimed New England band Pendragon). Mary Lee has that deep commanding tone similar to the superb June Tabor & Christine Collister. Joining Mary Lee is Ed Sweeney (6-string guitar/5-string banjo), & award-winning musicians Sheila Falls (fiddle) & Torrin Ryan (Uilleann pipes/flute & tin whistle). “Deer Island,” is especially powerful in its poignancy. What a pairing June Tabor (in her Oyster Band days – “Lullaby of London” & the classic 8-minute “The Water Is Wide” ) would be with Mary Lee. June being a tad deeper in tone & Mary Lee with her clarity. This is a beautiful song mindful of the stories that the English band Strawbs is known to do. This duo should cover Strawbs’ magnificent David Cousins’ song retelling the true story of “Grace Darling” (a teenager who helped her lighthouse-keeper father save sailors from a sinking ship during a turbulent storm). You don’t have to be a lover of traditional-melodies & songs to fully appreciate this unit & how they support the richness of Mary Lee’s wonderful voice. Even during a more tragic tale “New England’s Daughter,” that explores early workplace abuses. Ms. Partington’s original song tells a banjo-led story with a disciplined melody. This is the tradition of Fairport Convention’s late lead singer Sandy Denny who would’ve enjoyed the work of Partington & Sweeney. But at this junction, the duo is not as intense as Fairport Convention since they have no lead guitarist like Richard Thompson. Maybe that will be further down the road. “Like Bread Upon the Water,” tells a tale of a young girl who recollects the harsh treatment she received on a Yankee farm where she was sent after the death of her mother. Seems cruelty in this era didn’t discriminate – she wasn’t a slave but probably a bondswoman, or indentured servant. And they suffered atrocities as well. More commercial & accessible to modern ears is the final cut written by the beloved English folk singer Alan Bell. “So, Here’s to You,” — a gentle acoustic tune with fiddle & tin whistle. A penetrating melodic ballad. The LP – delightful from start to finish.” - John Apice