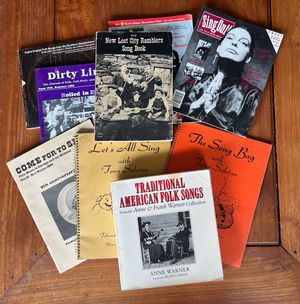 I recently returned from the Folk Alliance International Conference in Kansas City. A phrase I heard from a few artists and venues was that I play Cover Songs! I didn't take this as a compliment.

It used to be the term cover songs was meant for popular songs that you heard on the radio or television. This current usage has expanded to include all traditional songs & melodies, blues... anything that the artist didn't write.

Sadly this expanded usage creates an artistic division between singer-songwriters and song interpreters.

What would have happened if this artistic division was in effect around in...let's say, as an example, 1940.

Woody Guthrie wrote This Land Is Your Land around 1940. He recorded it for Moses Asch in 1944 when he was on leave from the Merchant Marines. It was not a popular song when Woody Guthrie recorded it.

Since 1944 This Land Is Your Land has been recorded by the Wayfareres (1956), The Weavers (1958), The Kingston Trio (1961), Peter, Paul & Mary (1963), Bruce Springsteen (1986) just to name a few. Pete Seeger sang this song to children in schools all over the world.  Millions have sung it. This Land Is Your Land is part of our American cultural heritage. All because people were empowered to sing a cover song. They made it their own and sang it in their own way.

There is a perception that we always need something "new" in order to be entertaining or to relate to an audience or be relevant. A couple of questions:

* What happens when no one will sing the songs that were written in the past?

* Will the stories and artistry be lost?

* Is our history, past artistry and perspective being diminished?

Don't people write songs for others to sing, enjoy and perform?  Can't we share? Will their stories will be eventually lost?

To paraphrase a question from the musical Hamilton, who will tell our stories?