“ An outgrowth of when Sweeney hooked up with members of the Silk Road Ensemble, this cross cultural mash up is serious but has none of the seriousness of too much world beat. But there's no disrespect in it's air either. Ya heard much Chinese Celtic lately? Equal parts ear opener and door opener, the armchair traveler has a treat here that hasn't been his way in some time. Well done. ” - Chris Spector

Our introduction to one another was short and to the point: “Yang Wei, this is Ed. He plays banjo. Ed, this is Yang Wei. He plays pipa. You two should talk.”

It was 2006 in Chicago, and talk we did ­– that night throughout dinner and for hours the following day.

A few months later in Rhode Island, we picked up where we left off. This time, dinner was at my home, where we swapped stories and songs and discovered how much we enjoy one another’s music and musicianship.

We tend to perform a potpourri of music.  That potpourri includes traditional music from China, United States, Russia, Ireland, hymns and Gregorian chant.

We try to get together as much as our schedules and geography allow. What lies ahead? We are not sure, but whatever it is, it will include friendship, music, and stories.

Yang Wei has been celebrated worldwide, performing for and inspiring audiences throughout Asia, Europe, and the United States.

His musical education began at the age of 6, and by age 18 he performed as a soloist with the National Shanghai Orchestra. In 1989 Yang Wei received the ART Trophy First Prize for the International Chinese Musical Instruments Competition in the Young Professional Pipa Section.

In 1996, he moved permanently to the United States, making his home in the Chicago area.

In addition to performing as a soloist with orchestras around the world, he has toured with the acclaimed Silk Road Ensemble since 2000 performing alongside world-famous cellist Yo-Yo Ma. Also an educator, Yang Wei has been an Artist-in-Residence for the Art Institute of Chicago, received a Fellowship in Ethnic and Folk Arts from the Illinois Arts Council, and was a resident artist at the Humanity Institute of the University of Michigan.

Yang Wei's artistic perspective honors the musical heritage of his homeland in China, but also combines the Western influences of his new home. He is committed to sharing his music with the community around him and continues to be interested in exploring the possibilities created by blending his eastern instrument with Western influences and themes.

Traditional Chinese on Pipa and Banjo

“If only we knew ‘What Lies Ahead’ for us or maybe not such a good idea since I’m a firm believer in living in the present. And speaking of the here and now, I have to admit after hearing this 2015 album for the first time in 2021, I was blown away! I’m a sucker for a great acoustic record and ‘What Lies Ahead’ does not disappoint my ears & musical palette. This record features Ed Sweeney and Pipa master Yang Wei along with featured guests from YoYo Ma’s Silk Road Ensemble. And if you’re wondering what a Pipa is, it is a four-stringed Chinese musical instrument sometimes referred to as a “Chinese lute”. You have the world-renowned Yang Wei on the Pipa and Ed Sweeney on 6 & 12 string guitars and 5 string banjo. Together, these amazing artists created 15 compositions that are a BIG breath of fresh air. The uniqueness in sound & melody is detected immediately as soon as you hit play. This is due in big part to the merging of cultures musically where the East meets the West. ‘What Lies Ahead’ starts off with “Medley: K’ang Ting Love Song/The Star of Country Down” where traditional Chinese music meshes with Old World Celtic. The overall result is one joyous & spiritual journey that also incorporates a wonderful arrangement. Next, we have “Medley: Veni Creator Spiritus/The Lourdes Hymn” that showcases Ed Sweeney with a golden guitar melody that is so pure sounding. Track three, “Old Six Beats”, brings some good, old-fashioned banjo to the mix adding another dimension to the ancient Chinese culture. “Old Six Beats” is a unique blend of audio that offers mass appeal and works like a charm. Moving on, we dive into “Liu Yang River” that is flowing along with elegance & precision and the masterful Pipa is on full display. Track five, “Miss Hamilton”, supplies a tender touch, soothing melody and relaxing tone overall. On “Send Me a Thornless Rose”, the Pipa and tabla are bringing this song to life with an incredibly lively beat and tribal element. For those of you who aren’t familiar with a tabla, it is a percussive instrument that stems back to the Indian subcontinent. Get ready to head to the “Meadowlands” where the 12 string guitar is the star of the show and where Ed Sweeney and Yang Wei are bringing you some Russian influence by way of intriguing notes. What an inventive version of “O Come O Come Emmanuel” I heard next where the musicians stayed true to the core structure of the original. What a powerful song “O Come O Come Emmanuel” is to me personally and I have to say Ed Sweeney and Yang Wei did it justice. On track nine, “Bang Chhun-hong (Longing for a Spring Breeze)”, the listener will get swept away by a pleasant & peaceful burst of wind that is beautifully orchestrated and simply music to my ears! Prepare to receive “Simple Gifts” from Ed and Yang as we travel to lands near & far; over the mountains and past the hills. Track 11, “Talk About Suffering”, switches gears with a soft, low-key approach that is a bit somber and most certainly gets your attention right away. All gather for the Ed Sweeney Banjo Extravaganza on “Medley: Jesu, Joy of Man’s Desiring/Scotland the Brave/Sourwood Mountain” where it’s all about fun-filled times. Track 13, “Please Stay with Me Friend from Far Away”, highlights Yang Wei and Pipa playing at its finest, which in turn makes for one enjoyable listening experience. The “Snowflake Reel” is falling our way next and what you get is a real mover & shaker-type tune that is fast but efficient. There are new sheriffs in town on the closing number, “Home on the Range”, giving us a completely different rendition of this Western classic that gets the stamp of approval. ‘What Lies Ahead’ is a pure joy to listen to from beginning to end and instant gold in my book. Ed Sweeney & Yang Wei have created a high quality, original album that is full of timeless material. As previously stated, I always enjoy a good acoustic record and so many more spins is ‘What Lies Ahead’.” - Jimmy Rae 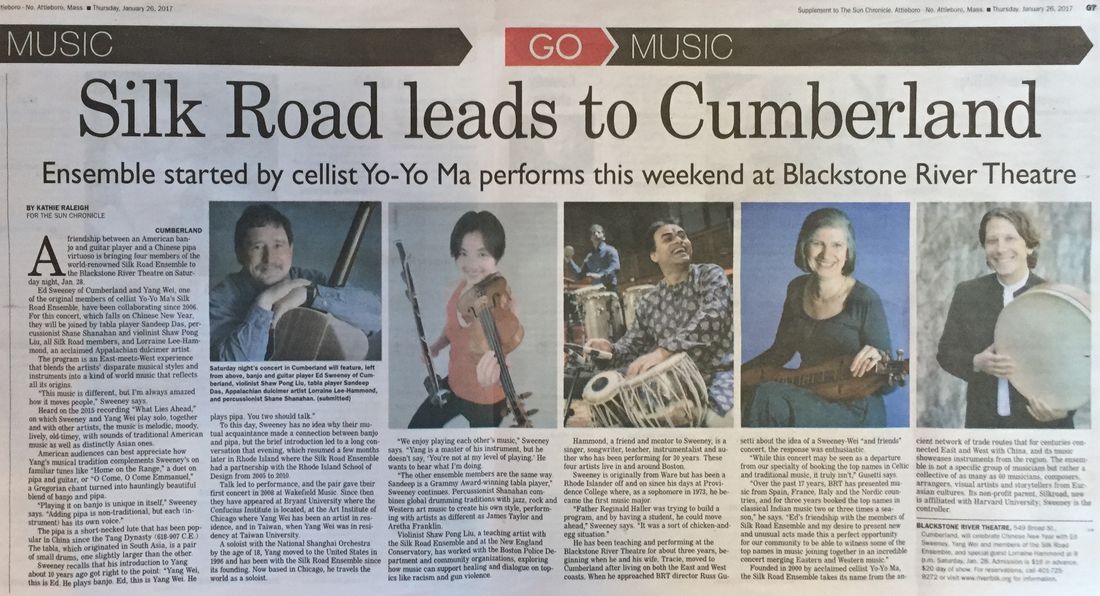 “"Lao Liu Ban" 《老六板》 for banjo and pipa -- one of the best Chinese-American cross-cultural collaborations I've ever heard (originally uploaded to YouTube in 2012). This whole CD is highly recommended. Both players are at the top of their game, and their instruments blend really well together. ” - David Badagnini

“Until I experienced Yang Wei with the Folger Consort's "Harmony of Friends" concert, I had no real understanding of the pipa's virtuosity” - Karren LaLonde Alenier